University of Kentucky College of Agriculture, Food and Environment

LEXINGTON, Ky. (Aug. 23, 2018) — USDA’s January Cattle Inventory Report suggested that growth in the size of the US cow herd was slowing. July’s numbers generally pointed in a similar direction. Both beef cow numbers and total cattle and calves were up about 1% from July 2017, which suggests a more moderate growth rate. This was coupled with a 2% reduction in heifers held for beef cow replacement. Beef heifer retention as a percent of beef cow inventory was 14.2%, which generally does not suggest expansion. While this is significant, I tend to put more stock in the January numbers than the July numbers and January heifer retention was still pointing to some herd growth.

Several factors drive beef cow numbers, with calf prices likely at the top of the list. Our current calf market is very similar to where it was last year. Given the much higher meat supplies and uncertainty on the international trade front, I actually think this cattle market has been incredibly resilient. While many producers aren’t pleased with calf prices, I don’t think calf prices are low enough yet to be encouraging liquidation at the national level. On the other hand, weather is becoming a growing concern for many.

While there are always exceptions, this has been an excellent year for forage growth in Kentucky. A quick glance at the drought monitor would suggest it has been a pretty good year for much of the southeast. However, dry conditions are becoming a larger issue for a good portion of cattle country. Significant drought (and abnormally dry conditions) appears to extend from Missouri south to Louisiana and west from there, taking in much of the southern plains. While we don’t get state-level estimates in July, it is very possible that this might partially explain the decreased heifer retention. As we move towards fall, it will be interesting to see if we see much movement of cows, or increased cow slaughter, in the region. This has the potential to greatly impact beef cow numbers between now and winter.

This article was written by Kenneth H. Burdine,, associate Extension professor in the University of Kentucky College of Agriculture, Food and Environment. The article first appeared in the May 25, 2018 edition of the Center for Crop Diversification newsletter. 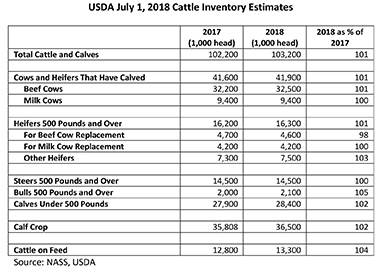