Photos of the Kentucky Hemp Forum and tours of Kentucky farms

USDA Secretary Sonny Perdue, who participated via video, said, “I’d like to thank Senate Majority Leader McConnell and Commissioner Quarles for hosting this session. Because of the leadership of Leader McConnell, the 2018 Farm Bill included new language that instructed USDA to issue regulations to implement a nationwide program for the commercial production of industrial hemp in the United States. The Commonwealth of Kentucky has been a leader on this crop since the inception of the state’s pilot program. Leader McConnell and Commissioner Quarles understand the importance of this growing crop in our broader farm economy, and I’ve been clear about the need to establish the regulatory framework for future certainty and opportunity in the production of industrial hemp. Listening sessions like this are very helpful in assisting our staff to gain a better understanding of your needs as we develop rules in accordance with the mandates in the 2018 Farm Bill.”

“Hemp has a remarkable history in the Bluegrass State. From Henry Clay’s fields at the Ashland Estate to helping the Greatest Generation in the Second World War, Kentucky has been at the forefront of hemp production in this country,” Senator McConnell said. “I’d like to thank Undersecretary Ibach and Administrator Barbre for coming to Kentucky to hear directly from farmers and producers as the USDA works to implement the hemp program I authored and secured in the 2018 Farm Bill. Forums like this allow hemp growers, processors and interested parties to engage with federal agencies as they move forward with guidance that pave the way for the full realization of hemp’s potential in an open marketplace. I appreciate the leadership and partnership of Commissioner Quarles and U.S. Representative James Comer (R-KY) to help Kentucky farmers and workers benefit from this exciting commodity.”

“What an honor it is for Kentucky to host U.S. Department of Agriculture Under Secretary Greg Ibach and Risk Management Agency Administrator Martin Barbre for a forum with Kentucky’s hemp community,” Commissioner Quarles said. “The fact that USDA selected Kentucky as its first stop to learn about hemp underscores that the Commonwealth is a national leader for this industry. I am incredibly grateful to Senate Majority Leader Mitch McConnell for championing the legalization of hemp nationwide in 2018 and for his willingness to keep up the fight for our hemp community as we transition to the widespread commercialization of hemp. I will continue to work with him and our partners at USDA to secure a national regulatory framework that will give all levels of the hemp supply chain the certainty they need to succeed and prosper.”

In December, President Trump signed into law the 2018 Farm Bill, which included Senator McConnell’s initiative to legalize hemp as an agricultural commodity by removing it from the federal list of controlled substances. Last week, Senator McConnell sent letters to several federal financial regulators encouraging them to help hemp farmers and producers explore the full economic opportunity of hemp.

In 2014, in collaboration with agriculture leaders in Kentucky and throughout the nation, Senator McConnell secured language in that year’s Farm Bill to authorize hemp research pilot programs, which is what Kentucky continues to operate under today. He also used his position as a senior member of the Appropriations Committee to insert provisions in yearly appropriations bills to ensure that hemp produced from the pilot programs could be transported, processed and marketed without interference from the federal government. Under the guidance of Commissioner Quarles and his predecessor, now-U.S. Representative James Comer (R-KY), these programs have allowed Kentucky farmers to both research the plant and to demonstrate its potential as a viable cash crop. 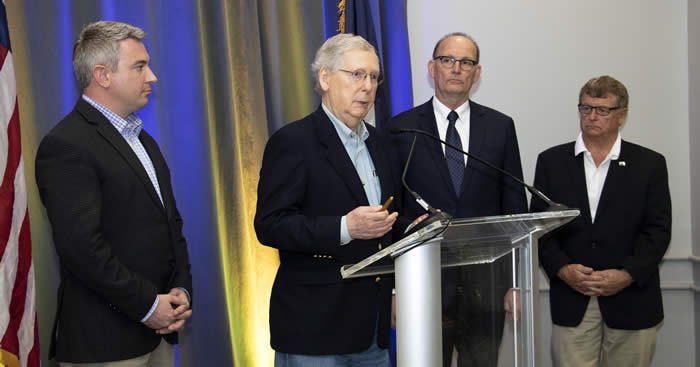