Leader McConnell: Quarles, KDA 'Well-positioned ... to Take the Industry to the Next Level'

“This is a historic day for the Commonwealth of Kentucky, as Leader McConnell has introduced a bipartisan bill to legalize hemp as an agricultural commodity,” Commissioner Quarles said. “This is an incredible milestone for the Industrial Hemp Research Pilot Program we’ve built here in Kentucky. I want to thank Leader McConnell and the entire Kentucky federal delegation for recognizing the successful program the Kentucky Department of Agriculture has built and for working to remove hemp from the list of controlled substances.”

The Hemp Farming Act of 2018 is co-sponsored by Senators Ron Wyden (D-Ore.) and Jeff Merkley (D-Ore.).

“Kentucky Agriculture Commissioner Quarles is a strong supporter of hemp and its potential,” Leader McConnell said during remarks delivered on the floor of the United States Senate. “Under his guidance, the industry is already growing and maturing in Kentucky through the pilot program. He and state leaders like him around the country are well-positioned to develop their own policies and take the industry to the next level.” 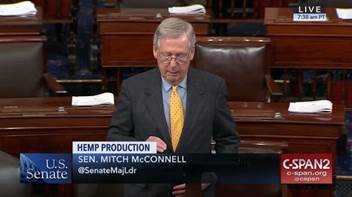