GEORGETOWN (July 9, 2020) – Agriculture Commissioner Dr. Ryan Quarles announced today that a Scott County Circuit Judge entered a temporary restraining order against the administration of Governor Andy Beshear, in a lawsuit brought by the Kentucky Department of Agriculture (KDA) and Evans Orchard and Cider Mill, LLC. The lawsuit challenged the constitutionality and legality of Governor Beshear’s use of executive power during the coronavirus pandemic.

“This ruling is a victory for the rule of law, public health, individual liberty, and small business owners across the Commonwealth,” said Commissioner Quarles. “The decision provides much needed certainty for businesses across the state as peak agritourism season approaches. I am hopeful this court order will encourage the Beshear Administration to follow Kentucky’s administrative laws and seek cooperation from the public and the General Assembly in putting public health first.”

Following a hearing this week, Scott Circuit Court Judge Brian Privett ruled in favor of Commissioner Quarles and Evans Orchard by granting a temporary restraining order against the enforcement of the Governor’s executive orders. Attorney General Daniel Cameron intervened in the case, siding with Commissioner Quarles and Evans Orchard. The order stops the statewide enforcement of the Governor’s executive orders with respect to all of Kentucky’s agritourism venues registered with the KDA. There are 548 agritourism sites registered with the KDA.

The complaint filed last week by the Commissioner and Evans Orchard alleges Governor Beshear’s executive orders are unconstitutional and unlawful. KDA officials argued that certain statutes passed by the General Assembly conflicted with sections 2, 27, 28, and 29 of the Kentucky constitution. Plaintiffs also alleged that the proper authority for issuing emergency regulations is set forth in Kentucky’s Administrative Procedures Act (APA). In emergency situations, the APA permits the governor to issue emergency regulations that take place immediately and still allow for public comment and review from the General Assembly’s bipartisan and bicameral administrative regulation review subcommittee, chaired by Senator Steve West and Representative David Hale.

“Surprisingly, lawyers for the governor admitted in court this week that the administration used the emergency regulatory process to expand telehealth during the pandemic, but they didn’t do that when they closed or began to reopen the economy,” said Commissioner Quarles. “With cases rising around us, it is now more important than ever before that the Beshear Administration prioritize public health and public input going forward. If the Beshear Administration believes new measures are needed to slow the spread of the coronavirus, they must stop trying to govern via executive order and begin following the emergency regulatory process that allows for public comment and input from the Kentucky General Assembly.”

Evans Orchard and Cider Mill, LLC is a fifth generation family farm-owned agritourism destination in Georgetown, offering a you-pick orchard, a 96,000 square foot playground, and a converted barn facility that serves as an event venue. During the pandemic, Evans Orchard adopted new public health guidelines. Measures taken by the agribusiness included reducing capacity to allow for social distancing, requiring customers and employees to wear facemasks, and doubling down on efforts to sanitize frequently touched surfaces.

Evans Orchard worked with the local health department in Scott County to comply with orders for public facing business and outdoor attractions, but struggled under what Commissioner Quarles has called “regulatory mayhem” due to the haphazard nature of the Governor’s orders. In one instance, an official told the Kentucky Proud venue no more than 10 individuals could be in a 96,000 square foot outdoor play area. In another, an official waited five days before responding to an inquiry about reopening to the public. Seeking further clarification, Evans Orchard sent a letter to Governor Beshear’s office on June 9 about the restrictions and did not receive a response. Due to these burdens, Evans Orchard has experienced major financial losses. Without this temporary restraining order, the business could not operate its playground and event venue profitably for the remainder of the calendar year. 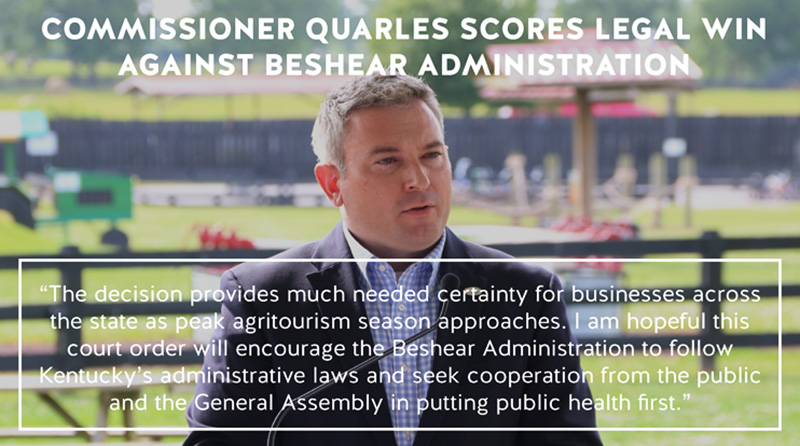