FRANKFORT (February 20, 2020) Hard-working people in middle and rural America are under attack from all corners of our country these days. No matter where you turn, actors and politicians are consistently misinforming people about the basics of agriculture and belittling working families across the nation.

First came actor Joaquin Phoenix, who won the best actor award for the movie Joker. In his acceptance speech, he attacked the dairy industry for stealing calves and milk from cows. I don’t know about you, but I like to go to the movies without getting lectures from entertainers who don’t seem to know the difference between a soybean and a green bean. If Mr. Phoenix would spend one moment with a Kentucky dairy producer, he would learn quickly that his ideas about dairy farming don’t match reality. For all of the talk from Hollywood actors about helping far-flung foreign countries, you would think they would want to make sure that the hungry and malnourished in the developing world had access to milk, often referred to as “nature’s perfect food.”

If you turn on the news at night, odds are you are going to see a presidential campaign ad from billionaire Democratic presidential hopeful and former New York City mayor Mike Bloomberg. In an online video that surfaced recently, Bloomberg suggested that he could “teach anybody…to be a farmer” because as he put it, it only involves digging a hole, putting a seed in the ground, watering it, and – in his words – “up comes the corn.” He then compared farming and factory jobs to the information technology sector, suggesting that IT workers require more analytical skill than farmers or factory workers.

I can’t speak for New York City, but here in Kentucky and across wide swaths of rural and middle America, we believe that there is dignity in all work, whether you have mud on your boots, grease on your hands, or a tie around your neck.

The reality is that the comments from Bloomberg reflect the views of a guy out-of-touch with both farmers and blue collar workers. Both careers require analytical skills and sophisticated technology in their jobs every day. Talk to farmers about the latest farm equipment that they control with a smartphone or to a mechanic who repairs the complex machine building Toyota Camrys in my native Georgetown, Kentucky. Brainpower is needed especially in farming, where you have to be your own agronomist, mechanic, and CEO.

Both men look like they have not learned even one of the reasons why some voters sent President Trump to the White House in 2016. A silent majority rejected their condescending lectures in hopes of injecting Washington, D.C. with the commonsense values that we see here in the middle of the country.

A recent Kentucky newspaper article called me a “culture warrior” for sticking up for workers and farmers in the face of these sort of attacks. If defending hard-working people of all backgrounds makes me a culture warrior, then I say sign me up. Rather than belittling this sort of work, we should be lifting up the American farmer and the American worker, both who fulfil critical roles in the American economy.

Ryan Quarles is Kentucky’s Commissioner of Agriculture. He was elected in 2015. 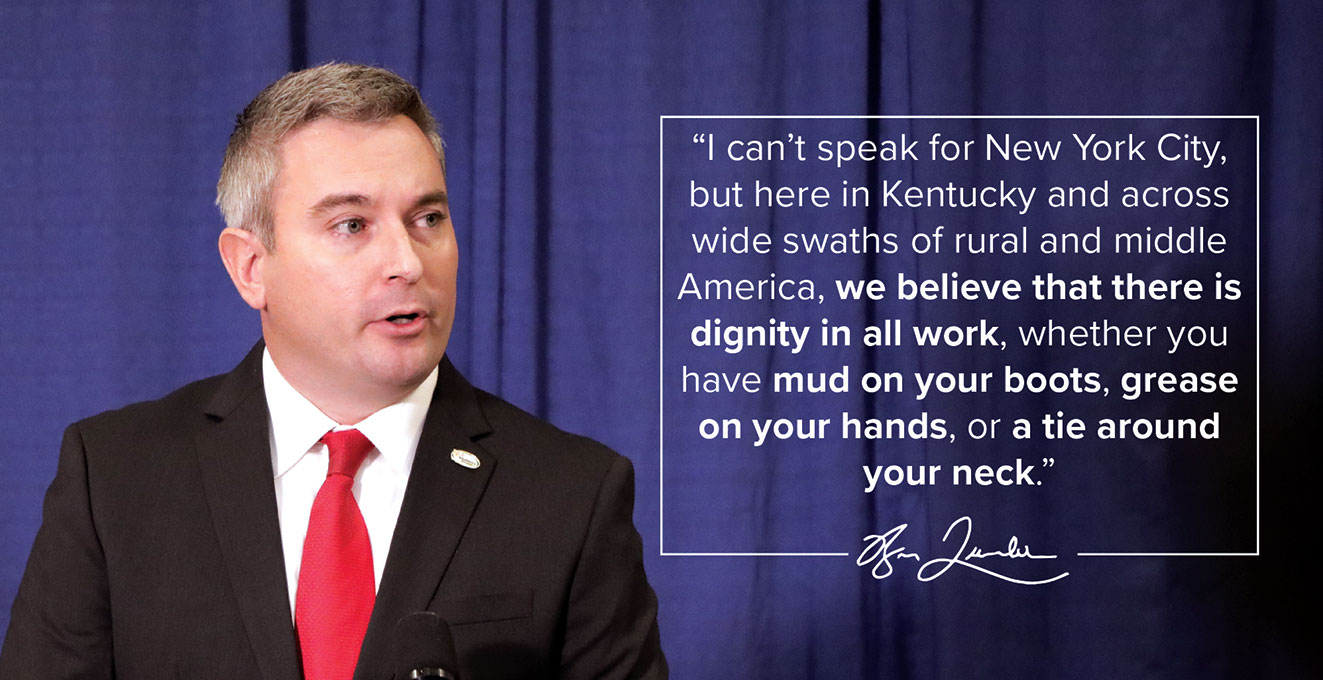